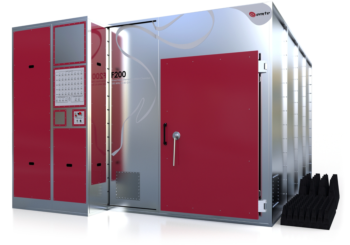 The F large-size hybrid Reverberation/Anechoic Chamber represents the most versatile OTA test system in the market today. With the same unique test features of their E Series RC counterparts, the F-Series can also test large form-factor devices under test (DUTs) like laptops, large TV sets, solar and trash compactors, drones, fridges or washing and vending machines, among others. With up to 16x16, 8DLCC and DUTs up to 2m and 500 kg including full-body phantoms in a turntable, the F Series also expands the frequency range down to cover 200 MHz up to 40 GHz frequency ranges and the test modes to include EMC, BS, small cell, eNodeB and Virtual Drive Testing over the air (VDT-OTA). In an again unheard-of feature, the F-Series is also reverse-convertible into an Anechoic chamber, allowing Far Field (FF) and Spherical Near Field (SNF) radiation patterns, efficiency and gain measurements and pre-5G testing of antennas and devices. Conversion from RC to AC or vice versa can be performed within half a day.

We use cookies to optimize site functionality and give you the best possible experience.